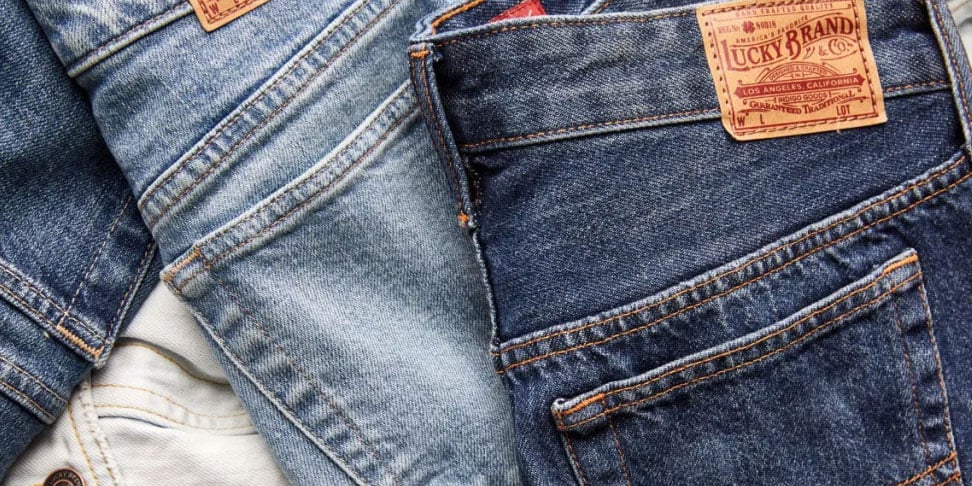 Founded in 1990 by Gene Montesano and Barry Perlman, Lucky Brand specializes in iconic American style, with a focus on vintage-inspired denim. The duo started their careers with Four Way Street: a Florida jeans company they opened in the 1970s. In between Four Way Street and Lucky Brand, Montesano launched Bongo Jeans.

With great fits, a cheeky sensibility and charming attention to detail – like the "Lucky You" stitched on each fly – their most popular silhouettes are named after women like The Hayden Bootcut and the Olivia Skinny. Each pair gets its “distinctively Lucky look by literally putting them through the wringer — ripping, fraying, sanding, patching and washing by hand — to give them true character and soul.”

Since 2010, some of the denim has been handmade in Los Angeles, and some outsourced. In 2013, Lucky relaunched MIA (Made in America) denim using Cone Denim fabrics from White Oak Mill in North Carolina, that goes on to be hand-stitched in Los Angeles. Most women's and men's styles have a MIA version for consumers to choose. In late 2013, Leonard Green & Partners acquired Lucky Brand Jeans for $225 million from Fifth & Pacific Companies, and the brand has grown to include everything from activewear to fragrances as well as popular footwear and an expansive collection for infants and kids.

Started in 1996, The Lucky Brand Foundation – in its goal to help children's charities including Smile Train, Camp Sundown, Island Dolphin Care, Shane's Inspiration and The Bridge School – has raised over $8 million with live music events and their annual Black Tie & Blue Jeans Gala. In addition to 150 stores in the U.S. and Puerto Rico, and a handful in Europe, Lucky is sold in Canada, the UAE and Australia.