Dressed Up or Dressed Down? What Consumers Are Purchasing Right Now Might Surprise You

True Fit
Dec 3, 2020 3:42:37 PM
August, the last full month of summer. In retail, August is Autumn and fall releases are well underway. In a time of so much ambiguity – what does back to school look like, or returning to the office – what are consumers shopping for when it comes to apparel?

True Fit analyzed data from more than 200M shoppers across 42 countries, in parallel with the details of over 220,000 unique products from 8.4M checkouts to find out what consumers are shopping for right now.

Where are Consumers Shopping, at Single Brand or Multi Brand Retailers?

Data from True Fit's Fashion Genome shows a shift in order trends from consumers, as the total number of orders from single brand retailers are significantly outpacing last year from early March through August. Multi-brand retail orders are level to last year with little growth since initial post-holiday sales in January.

How to read: 0% = normalized; comparing % change in total number of orders WoW to 2019 with the same group of both single and multi brand retailers.

Though the total number of orders for single brand retailers is up close to 70% YoY and up 3% YoY for multi brand retailers, True Fit found that AOV is still down 18% YoY in August. This means consumers are making more frequent, lower value purchases.

What are Consumers Purchasing? 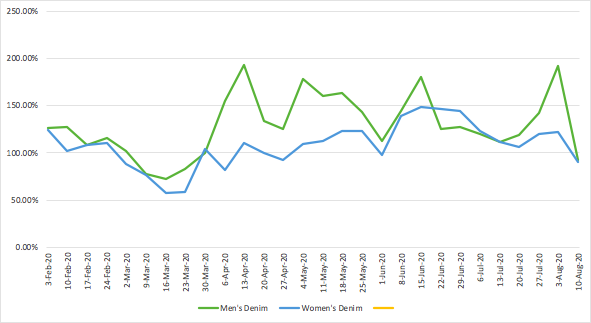 Consumers say these are their favorite fitting denim brands – do you see your brand?

Back in March Walmart reported that their sales of tops was up, but not bottoms, likely due to working via video. Since April, True Fit’s Genome data also shows the total number of orders placed for both men’s and women’s tops have been trending slowly but steadily up, when compared to 2019. But what kind of tops?

As seen below, the orders for women’s tops by category tells a very specific story. Starting in March, the number of women’s blazer orders dropped dramatically and remained well under 2019 order numbers until the end of June, where they crossed the LY benchmark. Since then, the number of orders of women’s blazers is still – mostly – well below last year’s order numbers. 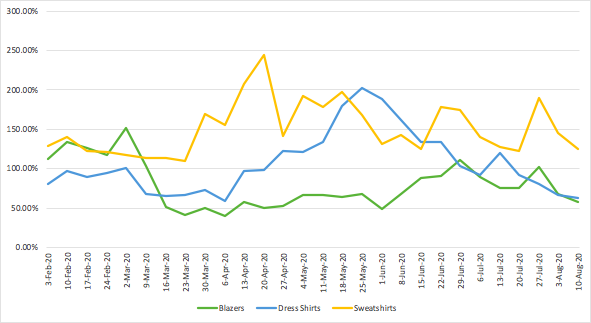 Women’s dress shirts have followed a different trajectory, initially below the 2019 benchmark prior to the pandemic, but the category has recovered faster than blazers. In late April, women’s dress shirts surpassed 2019 order numbers, peaking in early June. However the summer brought a steady decline to the category, as by mid-August the orders reflect those of blazers, almost 50% lower than the number of orders last year.

Sweatshirts, as no surprise, have had more than a “moment.” Orders for women’s sweatshirts began higher than 2019 in February and have since seen peaks and valleys that range from 25% higher than orders in 2019 at the lowest, and 150% higher than the number of orders last year at peak. Shoppers are still purchasing sweatshirts in August, as we see another spike coming into the month.

Men’s tops tell a similar story when we look at sweatshirts. Orders dipped below last year’s benchmark only once, and in mid-April, we saw a spike in orders, 150% higher than 2019. In August, the number of sweatshirt orders are still much higher YoY, similar to women’s sweatshirt orders. 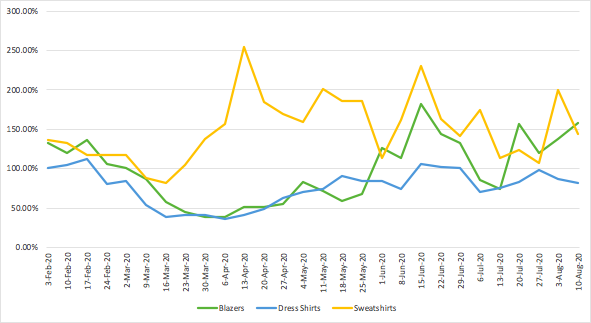 To read more information on where consumers shop beyond your brand, plus which brands consumers cite as their “favorite fitting”, check out the Favorite Fitting Brands report, full of insights from the Fashion Genome. Get the report here.

The Art and The Algorithm: Does Age Drive Consumer Behavior?